SEPA Request-to-Pay: what you need to know about the new scheme 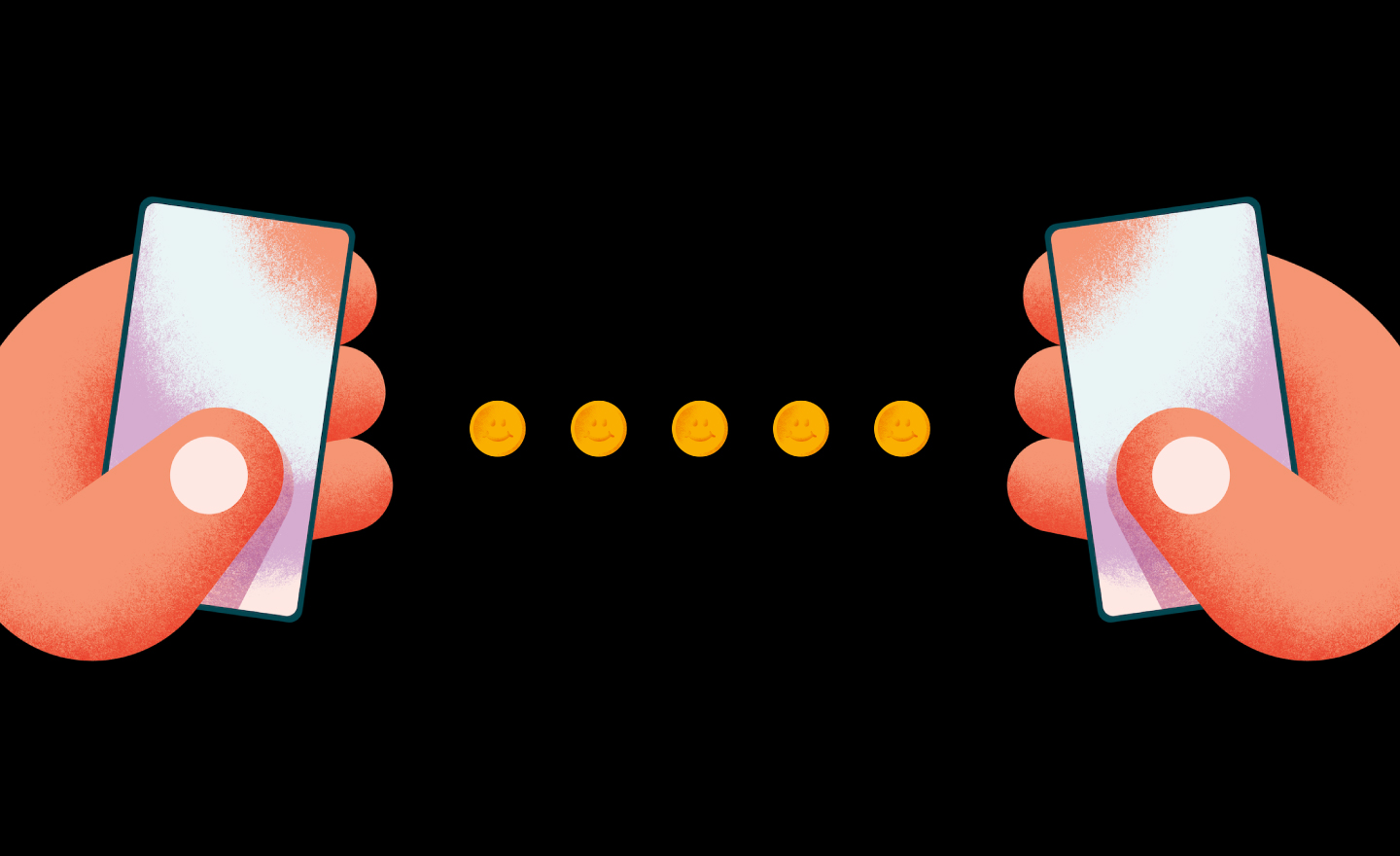 SEPA Request-to-Pay (SRTP), the latest effort to accelerate the digitisation and harmonisation of payments in the EU, is seen by some as having the potential to bring truly frictionless digital payments to Europe. With the new scheme’s rulebook introduced on June 15, 2021, now’s the time to get to grips with SRTP’s potential benefits — and limitations.

Request-to-pay in a general sense is already widely used around the world: peer-to-peer apps like Venmo, India’s Unified Payment Interface (UPI), and Tink customer Kivra all use some form of it today. SRTP is essentially an attempt to create a standard model for request-to-pay within the EU in the hope of encouraging businesses to offer it on a larger scale.

SRTP is not a means of payment or a payment instrument, but a way to request a payment initiation.

The scheme is a set of rules developed by the European Payments Council (EPC) to establish how a payee (a merchant, for example) can request payment from a payer (a consumer) online or in-person. The payer can then confirm or reject the request, provide alternate information if desired, and choose to pay immediately or on a future date.

It’s effectively a messaging system or framework, not a traditional payment scheme – settlement and clearing will instead be based on the underlying scheme, such as SEPA Instant Credit Transfer (SCT Inst). 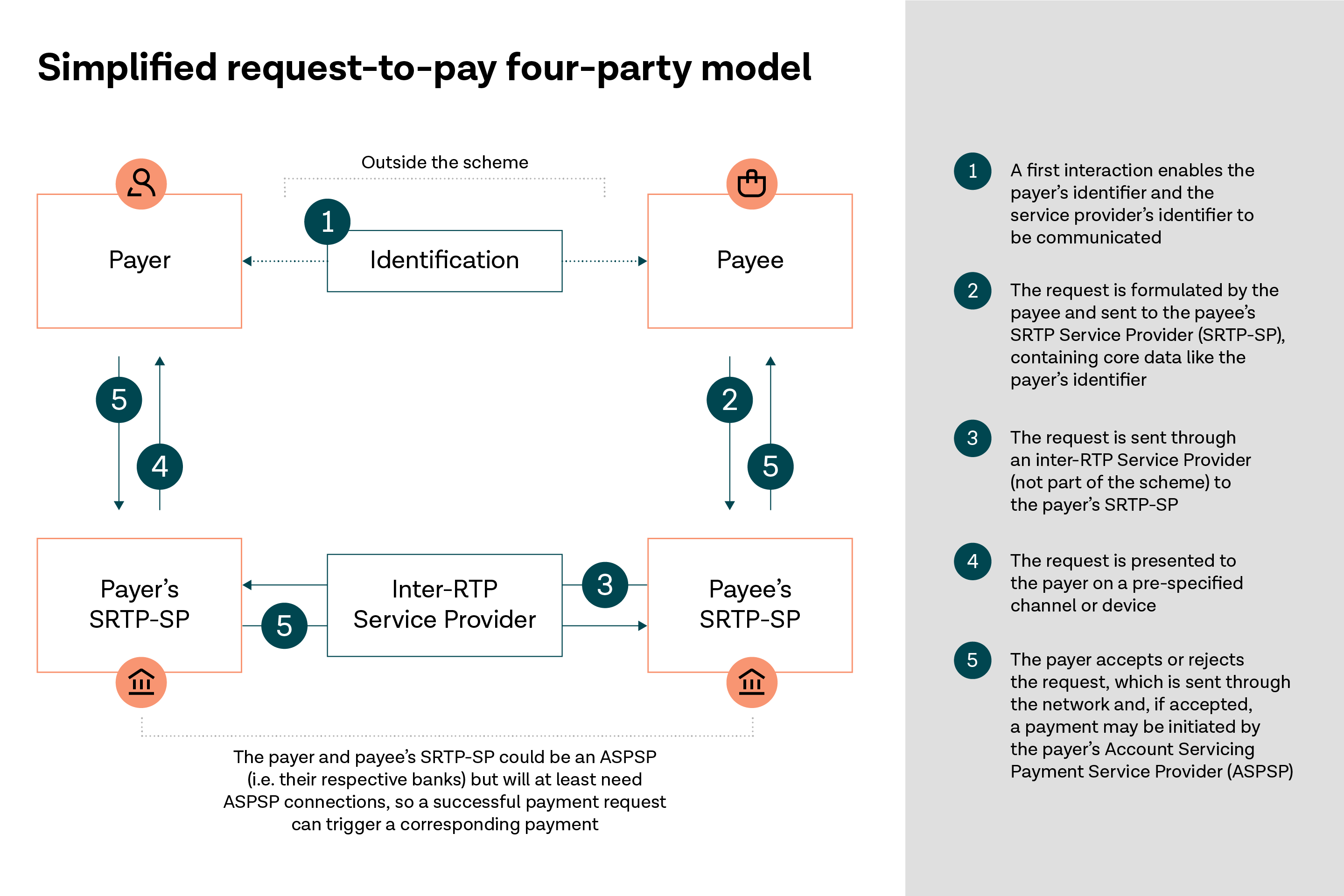 What’s different about it?

The goal of SRTP is to enable digital-first, data-rich payments where the transaction is secondary to the interaction or user experience.

The payer-payee interaction is decoupled from the payment itself, which could mean fewer possible sources of friction for the payer and a greater variety of service providers, including fintechs, providing the customer interface that facilitates it all.

Things like how the request is made or sent, or how the end-user authenticates, will be entirely up to the service provider. The EPC promises that the SRTP framework will be ubiquitous, and its messaging instant: service providers will process messages in near-real time, 24 hours a day, 7 days a week.

In theory, SRTP could usher in a new wave of innovation in payments. Its flexibility means it could be used to facilitate almost any online transaction including invoice payments, peer-to-peer transfers, and ecommerce.

We might see ‘pay now’ buttons proliferating across every digital channel and, when combined with instant payment rails, streamlined self-checkout solutions at the physical point-of-sale. (This seems like quite a way off, though, with no live implementations of SRTP in operation as of September 2021.)

What it means for banks

SRTP is open to any participant that supports the messaging framework. That said, only banks can both facilitate the request and process the payment itself, putting them in a prime position to monetise the scheme as service providers for both the payer and payee.

For SRTP to get off the ground in its current state, it needs to be banks that develop the use cases and drive usage.

The hope is that SRTP will incentivise banks to improve their overall digital experience in order to compete with other online payment methods, resulting in smoother authentication flows and smoother redirects. Whether this might extend to banks improving their PSD2 APIs, or prioritising SRTP flows, remains to be seen.

In theory, request-to-pay could be the missing link for banks in turning their apps into a one-stop-shop for payments, letting customers pay directly from their bank account at checkout.

And if banks can build out broad customer coverage, there’s a sizable opportunity to capture revenue as merchant service providers, winning share-of-wallet from more established payment methods like cards or wallets.

What it means for merchants

If SRTP does gain strong bank adoption, merchants could be one of the main beneficiaries. In a recent EPC poll, 56% of payment professionals surveyed agreed that customer-to-merchant or customer-to-business payments would be SRTP’s strongest use case.

SRTP’s core promise for merchants is that it simplifies the payment initiation process for the customer and can hopefully deliver a confirmation of payment in real time. This adds to its appeal as a fundamentally secure, low-cost payment method: two-factor authentication is built-in, and there’s no inherent cost associated with using it.

Of course, merchants will only seriously consider SRTP if and when there’s broad customer coverage throughout Europe.

What it means for consumers

How SRTP might ultimately benefit the European consumer depends on the products and services built on its framework. But it could simplify the user experience of paying directly from your bank account, since you won’t need to manually enter your details when making a payment.

A lot rests on how banks will implement SRTP, though, and the extent to which their customer interfaces are user-friendly and mobile-first.

Will it gain adoption?

For SRTP to be a success it needs to achieve both a high level of adoption among banks and a high level of interoperability between their services. Given the range of technical systems used by banks across Europe, many of them based on legacy infrastructure, this is no small task.

Merchant demand would stimulate the banks to act, but this raises a classic chicken-and-egg dilemma.

Only with a critical mass of participating merchants would SRTP become a must-have for banks, yet merchants won’t take notice unless there’s already sufficient bank (and customer) coverage. (SEPA Proxy Lookup, another non-payment scheme launched by the EPC in 2019, has suffered from slow up-take due to this very problem.)

Enabling PSD2-licensed platforms (like Tink) to play the role of the payer’s service provider more easily would help to overcome this issue and ensure broader reach. This would mean allowing SRTP to leverage existing open banking connections, effectively unlocking a critical mass of European banks and their customers. Tink has submitted a change request to this effect which will hopefully be adopted for the upcoming SRTP rulebook (v2.0) due November this year.

There are still a number of product-related hurdles to overcome too.

SRTP’s appeal is based heavily on its use of instant payment rails, but SCT Inst adoption has been patchy up to now with only 23% of European payment providers participating as of April 2021.

There are also doubts over whether an SRTP payment confirmation is equivalent to a payment guarantee, which is crucial for retail merchants since the confirmation message could be sent before the payment has actually been initiated.

Despite these challenges, one or two banks, namely Erste Bank in Hungary and Banca Sella in Italy, have started making moves towards offering SRTP services, while others (DZ Bank and HypoVereinsbank in Germany) have announced their intention to do so. Deutsche Bank, meanwhile, is working on its own API-based request-to-pay solution.

So there’s some early momentum, but the industry at large is yet to take any real action.

As a payment method, request-to-pay clearly has the potential to improve how payments work for businesses and consumers alike.

However, SRTP’s reliance on the banks to drive development and adoption could hold it back, with just a handful participating so far. Involving third-party providers or fintech companies like Tink would likely help it gain traction, especially in the more immediate future.

The thriving open banking ecosystem that exists in Europe today, having grown impressively in just a few short years, shows how opening up financial services to third parties can help drive innovation. We believe that updating the SRTP rulebook to encourage broader participation could have a similar effect, helping to accelerate its adoption and ultimately leading to better financial products and services for European consumers.